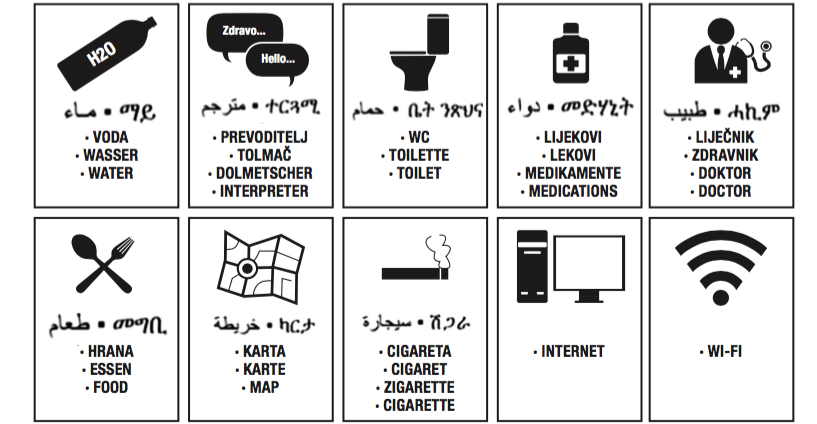 With the holidays approaching, we want to thank you all for your support! Since we started this website, >110.000 phrasebooks have been printed, several apps were developed and new languages added. In the next month, we want to foster distribution and update the existing pdf versions in collaboration with refugees and helpers. Here are some impressions from the efforts so far:

There are still many translations missing, but the current set is already a good basis. While the German translator community Bundesverband der Dolmetscher und Übersetzer e.V. (BdÜ) is recommending the project to translators (thank you!), we are still looking for volunteers to help with the gaps in Armenian, Pashto and other languages.

Communication is one of the most important element for all humans @OKFN #Greece shares #Refugees phrasebook #Idomeni pic.twitter.com/RiN8M1x2OO

While the first version of refugee phrasebook was still limited to a closed document with a narrow use case, volunteers quickly migrated the data to an open table in Google Sheets and significantly increased the number of participants with their network. As the data was published with a Creative Commons license (CC0), we are happy that several projects already included the data for better distribution:

The project received a lot of attention. Most importantly, the phrasebooks were accepted as a signal of welcome, a small step towards an open culture. An updated collection of feedback can be found here.

The printing and distribution project is now in its fifth month, and the demand for phrasebooks is still very high. Translations in several languages still have to be completed and checked, a common issue in our feedback is the lack of an Arabic pronunciation guide for non-Arabic languages, which could make it easier for non-native speakers to pronounce words in the languages of their destination countries. Most of all, we need dedicated workshops with refugee committees to identify the most useful phrases to recommend for printing. Since the language data has been corrected and extended since the first print runs, all existing apps as well as Wikibooks and custom design versions have to be updated. There is a lot to do, and thankfully the community support is still going strong.

How to get involved:

If you want to participiate in distributing language resources for refugees, here is what you can do:

Thank you all for your support!  We very much appreciate your help; we can’t do it without you.